AHA News: Teacher Collapsed in School Hallway From a Stroke 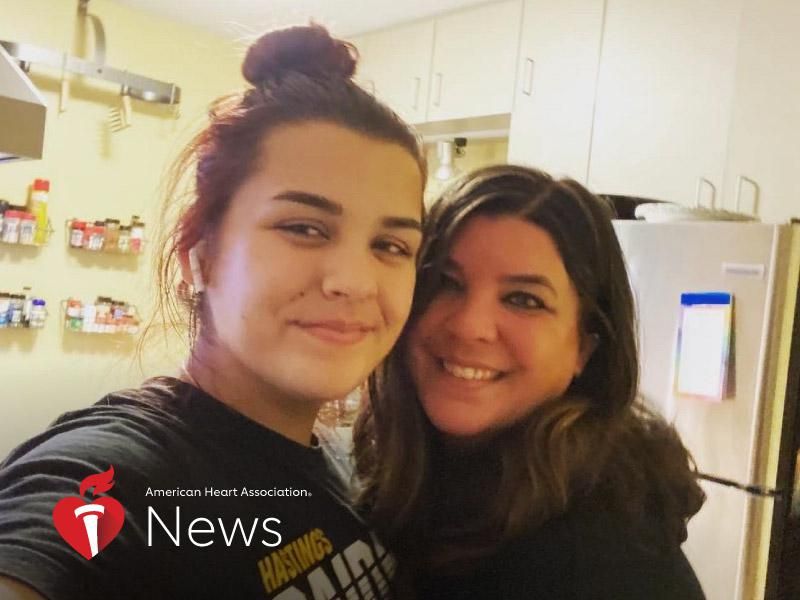 The school was still mostly empty, aside from a handful of teachers in their classrooms prepping for the day back in 2010. Nicky sat at her desk, and her right ear started to ring. She yawned to make it stop. When it didn't, she stood up. Then she felt her entire right side go numb. Scared, she stepped into the hallway and fell flat on her face.

When the EMTs arrived, they gave Nicky fluids and loaded her into the ambulance.

The school principal called her then-husband, Keith, who rushed to meet her at the hospital. Nicky threw up twice more in the emergency room. Doctors ordered a CT scan and concluded she had vertigo. They gave her medicines for pain and nausea, and sent her home.

A day later when paying bills, Nicky noticed her handwriting was messy and child-like. Her right arm and leg also were still weak.

"Something's not right," she told herself.

Her family doctor ordered an MRI. An hour later, the doctor called and said: "You need to go to the hospital. You had a stroke."

Nicky was shocked. In addition to being younger than a typical stroke survivor, she didn't have other risk factors. She ate healthy foods, exercised regularly and didn't smoke.

The hospital referred her to a neurologist who prescribed physical therapy for her recovery. But she also wanted an explanation for the stroke.

She thought about wanting to live to see Molly graduate high school and eventually have kids of her own. Nicky also wanted to learn whether the cause of her stroke was genetic, to know whether Molly also was at risk.

She eventually got her answer. Doctors discovered damage in the walls of an artery on the left side of her neck, allowing blood to leak into the surrounding tissue. It's a condition known as a pseudoaneurysm.

But the source of the pseudoaneurysm was a mystery. The closest thing to an answer was that her arteries are more elastic than normal, meaning that when they're jarred, the blood pooled in her tissues is more likely to move. Doctors instructed her to avoid activities with jerky forward motions, like skiing, which could cause more damage.

The uncertainty took an emotional toll.

"Every time my ear would ring, I'd shut down," Nicky said. "I had really bad PTSD and the what-ifs."

She allowed her thoughts to spiral, worrying about what could have happened if she'd had a stroke while driving with Molly. She became depressed and stopped exercising.

"I wallowed in my self-pity, and I kept a lot bottled in because I didn't want to seem vulnerable or weak," Nicky said.

Therapy helped. Then she got divorced. And then she met Justin Larson.

At first, "she was very cautious and guarded and nervous to do a lot of things," Justin said. Once she told him about her fears, she was able to get past them. She decided life is too short to live that way.

"I like to think I've rubbed off on her," he said. "She's willing to be more adventurous now."

The couple also have taken control of their health. They've given up soda, started cooking more and eating healthier foods.

Nicky also has begun educating others about the signs of stroke. Working with her school's health teacher, she shares her story with students and teaches them how to spot a stroke FAST: "F" is if you see face drooping, "A" is for arm weakness, "S" is speech difficulty and "T" is time to call 911.

What is a stroke? See Answer

"Had I known what the FAST symptoms were, I would have known I was having a stroke," she said. "I was oblivious. I thought a stroke could never happen to me."

Her biggest advice is to keep regular doctors' appointments, and don't stay quiet if you're not feeling right. "Nobody knows you better than you do."

Also, don't discount a stroke just because you're young.

"Being young doesn't mean you're immune," Nicky said. "Knowing the signs, risks and ways to help prevent heart disease and stroke is so important. It just may save your life or the life of someone you know."

Teens' Heart Risk From COVID Far Exceeds That of Vaccination...

Some Missouri Residents Getting COVID Shots in Secret, Feari...